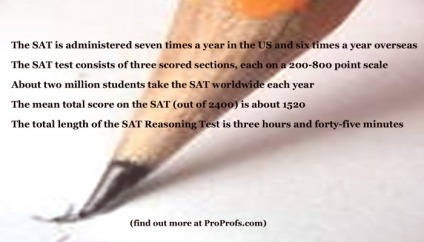 The College Board states that the SAT measures literacy and writing skills that are needed for academic success in college. They state that the SAT assesses how well the test takers analyze and solve problems—skills they learned in school that they will need in college. The SAT is typically taken by high school juniors and seniors.Specifically, the College Board states that use of the SAT in combination with high school grade point average (GPA) provides a better indicator of success in college than high school grades alone, as measured by college freshman GPA. Various studies conducted over the lifetime of the SAT show a statistically significant increase in correlation of high school grades and freshman grades when the SAT is factored in.

There are substantial differences in funding, curricula, grading, and difficulty among U.S. secondary schools due to American federalism, local control, and the prevalence of private, distance, and home schooled students. SAT (and ACT) scores are intended to supplement the secondary school record and help admission officers put local data—such as course work, grades, and class rank—in a national perspective.

Historically, the SAT has been more popular among colleges in the coasts and the ACT more popular in the Midwest and South. There are some colleges that require the ACT to be taken for college course placement, and a few schools that formerly did not accept the SAT at all. Nearly all colleges accept the test.

The SAT is sometimes given to students younger than 13 by organizations such as the Study of Mathematically Precocious Youth, who use the results to select, study and mentor students of exceptional ability.