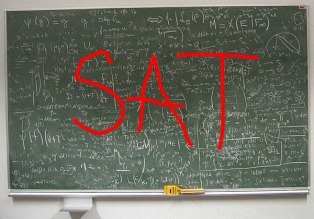 The SAT Reasoning Test (formerly Scholastic Aptitude Test and Scholastic Assessment Test) is a standardized test for college admissions in the United States. The SAT is owned, published, and developed by the College Board, a non-profit organization in the United States, and was once developed, published, and scored by the Educational Testing Service (ETS).ETS now administers the exam. The College Board claims that the test can determine whether or not a person is ready for college. The current SAT Reasoning Test takes three hours and forty-five minutes and costs $45 ($71 International), excluding late fees. Since the SAT's introduction in 1901, its name and scoring have changed several times. In 2005, the test was renamed to the "SAT Reasoning Test" with possible scores from 600 to 2400 combining test results from three 800-point sections (math, critical reading, and writing), along with other subsections scored separately.

SAT Subject Tests is the collective name for 20 multiple-choice standardized tests given on individual subjects. Students typically choose which tests to take depending upon college entrance requirements for the schools to which they are planning to apply. Until 1994, the SAT Subject Tests were known as Achievement Tests, and until January 2005, they were known as SAT IIs; they are still commonly known by these names. Every test is now a one-hour timed test. Historically, the exception to the one-hour time was the writing test, which was divided into a 20-minute essay question and a 40-minute multiple-choice section; it was discontinued after January 2005.

A student may take up to three SAT Subject Tests on any given date. Most SAT subject tests are offered on the same day as the regular SAT. The language tests with listening are generally available only once a year, in November. A calendar of test dates and registration deadlines can be found on The College Board's official website.