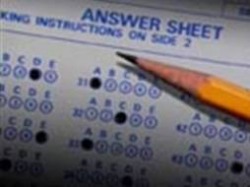 SAT consists of three major sections: Critical Reading, Mathematics, and Writing. Each section receives a score on the scale of 200–800. All scores are multiples of 10. Total scores are calculated by adding up scores of the three sections. Each major section is divided into three parts. There are 10 sub-sections, including an additional 25-minute experimental or "equating" section that may be in any of the three major sections. The experimental section is used to normalize questions for future administrations of the SAT and does not count toward the final score. The test contains 3 hours and 45 minutes of actual timed sections,although most administrations, including orientation, distribution of materials, completion of biographical sections, and eleven minutes of timed breaks, run about four and a half hours long. The questions range from easy, medium, and hard depending on the scoring from the experimental sections. Easier questions typically appear closer to the beginning of the section while harder questions are towards the end in certain sections. This is not true for every section but it is the rule of thumb mainly for math and sentence completions and vocabulary.

Notably, the SAT has done away with quantitative comparison questions on the math section, leaving only questions with symbolic or numerical answers. Since the quantitative comparison questions were well-known for their deceptive nature—often turning on the student's recognition of a single exception to a rule or pattern—this choice has been equated to a philosophical shift away from "trickery" and toward "straight math" on the SAT.  Also, many test expertshave attributed this change, like the addition of the new writing section, to an attempt to make the SAT more like the ACT.